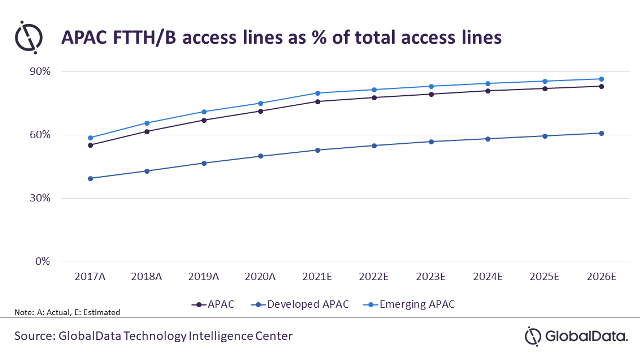 Revenue from fixed communications services in the Asia-Pacific (APAC) region is expected to grow at a compound annual growth rate (CAGR) of 1.7% to reach $406.2 billion in 2026, GlobalData forecasts.
Penetration of fixed broadband accounts in the Asia-Pacific region is expected to reach 21% by 2026, driven by broadband network expansion and service adoption in countries including India, Indonesia, the Philippines and Thailand.

The growth of the APAC fixed broadband market will be driven by fiber broadband. Fiber access lines will account for 61% of total fixed access lines in the developed APAC region by 2026, while its share in total fixed lines in emerging APAC markets will be relatively more. 80% high.

Growing demand for competitively priced broadband Internet services and fiber broadband packages from carriers offering benefits such as unlimited Internet access and access to major SVoD platforms will drive the adoption of broadband services. fiber speed in the region.

Similarly, FTTH/B will account for nearly 100% of broadband lines in Singapore by 2026. This is supported by NetLink NBN Trust’s aggressive approach and investments in fiber broadband network expansion.

Voice telephony penetration among the APAC population will remain at around 10% throughout the forecast period.

“Despite an increase in the total number of voice telephony access lines in the region, fixed voice revenues will decline over the forecast period due to increased mobile voice usage and OTT voice,” said Kantipudi Pradeepthi, telecom analyst at GlobalData.