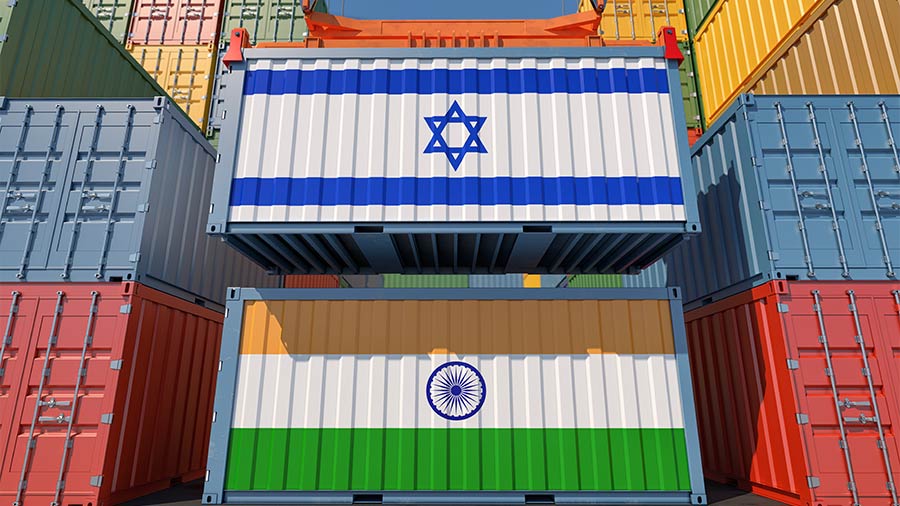 Trends in bilateral trade and investment between India and Israel

Marking 30 years of full diplomatic ties in 2022, India-Israel trade relations have further strengthened as talks on the possibility of a free trade agreement (FTA) have gathered pace. More recently, the two countries have begun to dialogue outside the prism of geopolitics. Israel’s technological prowess and agricultural advancement techniques are of immense importance to a rapidly digitalizing India.

Recent developments between India and Israel

India is Israel’s third largest trading partner in Asia and seventh globally. Bilateral trade between the countries has been enhanced through strategic and mutually important sectors like defence, security, agriculture, information technology (IT), etc. According to statistics, bilateral merchandise trade between India and Israel has increased from US$200 million in 1992 to US$7.86 billion in the financial year 2021-2022, with the trade balance in favor of India.

What are the main items traded between India and Israel?

Investment trends between India and Israel

As of March 2022, India received Foreign Direct Investment (FDI) worth US$270.91 million from Israel during the period April 2000 to March 2022. According to Indian government data , there are more than 300 investments from Israel in India, mainly in high-tech and agriculture, then spread across various sub-areas such as manufacturing plants, research and development centers (R&D), subsidiaries, etc.

New sectors, such as water technologies, homeland security and real estate, show an increased preference for Israeli know-how and expertise in addition to traditional areas of engagement, such as agriculture, chemicals, etc.

Israeli companies, including Teva Pharmaceuticals, IDE, Netafim, ADAMA, etc., are among those that have made notable investments in India.

India has also expanded its economic presence in Israel. In July 2022, Adani Ports and Special Economic Zone Ltd (APSEZ), a joint venture of India’s Adani Group and Israel’s Gadot Chemicals Tankers and Terminals Ltd, won the $1.18 billion Haifa Port bid. . Haifa is Israel’s second largest port and serves as a major commercial hub on the country’s Mediterranean coast. The city is Israel’s transportation and industrial center and a key rail hub along the Mediterranean. Interestingly, China has also recognized the importance of the region and in 2021 China’s Shanghai International Port Group (SIPG) inaugurated the nearby Bay Port container terminal, with an investment of $1.67 billion. .

As of September 2019, cumulative Indian investment in Israel stood at US$118 million. Indian software companies, including TCS, Infosys, Tech Mahindra and Wipro, are beginning to expand their presence in the Israeli market. Many other Indian companies have acquired large stakes in their Israeli counterparts. For example, Jain Irrigation fully acquired NaanDan, an Israeli irrigation equipment manufacturing company, and Sun Pharma, which acquired a 66.7% stake in Taro Pharmaceutical Industries in Israel.

India Briefing is produced by Dezan Shira & Associates. The firm assists foreign investors across Asia from offices around the world, including Delhi and Mumbai. Readers can write to [email protected] for more support on doing business in India.

We also maintain offices or have alliance partners assisting foreign investors in Indonesia, Singapore, Vietnam, Philippines, Malaysia, Thailand, Italy, Germanyand in the United States, in addition to practices in Bangladesh and Russia.